This past Saturday was my baby shower. Check out the details here. I asked Michael if he wanted to attend my shower or do a co-shower of some sorts. He didn’t seem that big on either idea,  you know the whole “baby showers are for girls” things. But I wanted to do something special for him. He’s has taken such good care of me my  pregnancy so far that he deserved some fun. So I asked if he just wanted low-key party with his boys at our house. He loved that idea—mainly because it meant he could drink beer and eat all the BBQ meats I never make him.

So nothing about this post is particularly vegan. But if you have a vegan man in your life, no reason why you can’t take the general idea and substitute in vegan foods. Like my seitan ribs, some tofurky brats, my German potato salad, and some fresh grilled veggies…man,  that sounds good—can it be summer now? 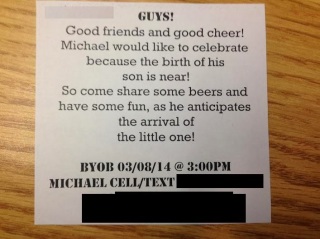 His party was at the same time as my shower.We kept the invitations simple—if a women invited to my shower had a guy Michael wanted to invite, we stuck this insert in her formal invitation. Otherwise, he just emailed them a date and time to show up. Men don’t usually need or care about fancy invites, so we didn’t waste money on them.
I didn’t put up too many decorations because, once again, men don’t usually notice stuff like that. Just a few  black and orange table clothes, a banner, and a few Giants signs we had already. I didn’t spend too much time on decorating (unlike for my baby shower). Just make it look nice and walk away. No fuss.
I set-up the “appetizers” table before I left for my shower. Veggie platter, nachos, chips, potato salad, chocolate-covered pretzel rods, and baseball cupcakes (rods and cupcakes made by my very talented best friend).
I left the meat for Michael to cook. We borrowed our brother-in-law’s smoker to do some ribs. He barbecued some turkey dogs (a lot of his friends are Indian and don’t eat beef), hot links, and buffalo wings. Don’t have pictures of all that because I wasn’t there….and to be honest I don’t like taking picture of meat seeing as I am vegan….
Drinks consisted of tropical punch (one can of passion orange guava juice and a liter of sprite, watered down to taste with ice), and of course beer.
The boys just ate, drank, played dominoes, listened to music, and watched sports on TV. Nothing fancy but they all had a good time. After my baby shower was over, some of the women came over to join them. Yeah, that’s right—my baby shower had an after party! Some of the boys ordered the Canelo vs. Angulo fight on pay-per-view, which kept the party going till around 11 PM. Even though I was tired, it was nice to see friends and family enjoying themselves so I didn’t mind.
So, if your man cringes at the idea of going to your baby shower, I highly suggest throwing him a man shower instead. Yes, you are the one doing all the hard working making the baby, but dads need some love and appreciation too.
Here is my advice on how to throw a successful man shower: