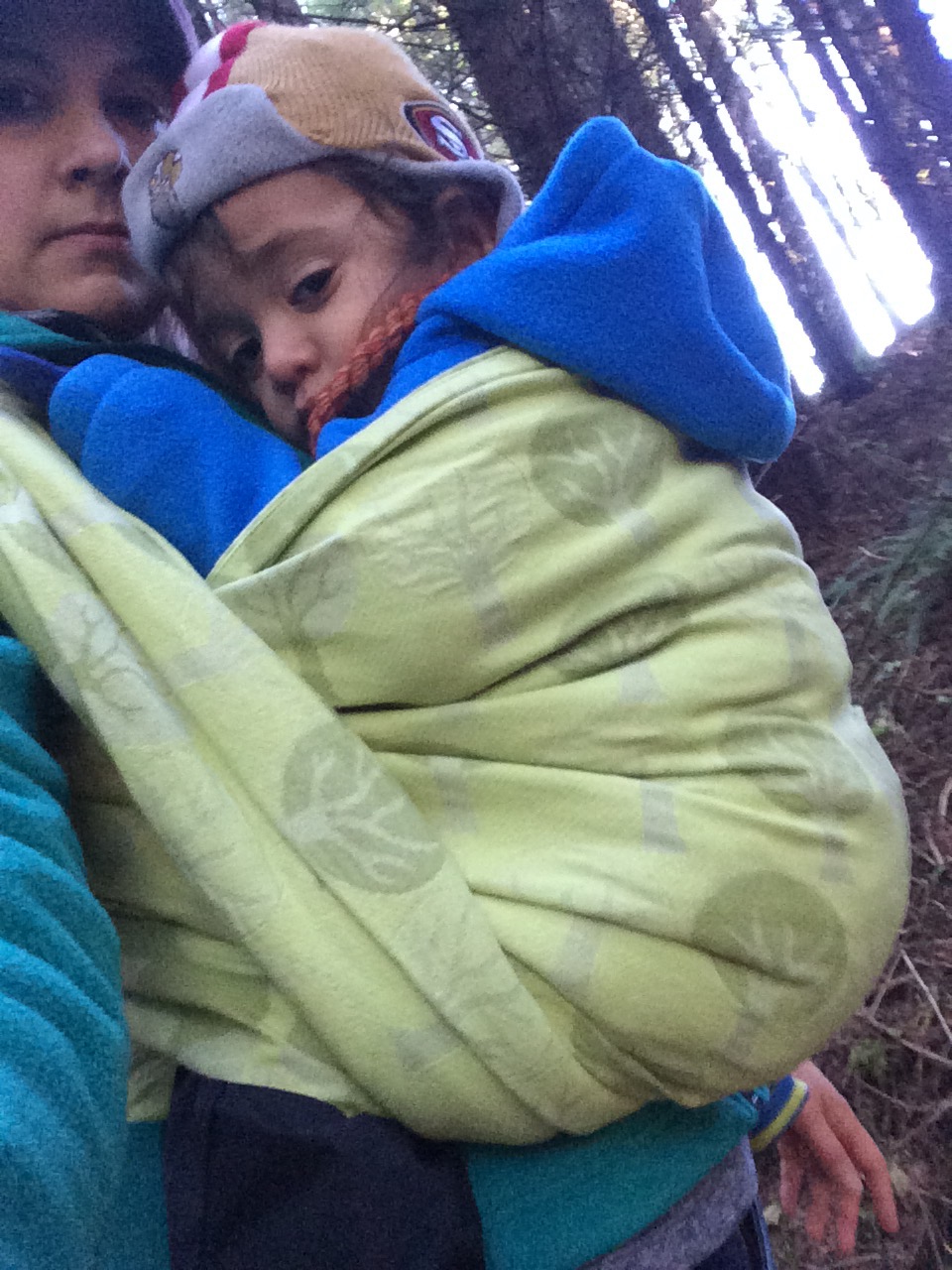 I purchased this carrier for the lending library I am starting up. It needs some breaking in so I figured some hikes would soften it up. Then I heard all Oregon State Parks were free on Black Friday, so no way we could not hit the trails! I thought it was perfect for a stroll through the forest, all decked out in trees.

It’s definitely a beastly wrap. Thick, grippy, and tough to break in. It was hard to get a good tight knot due to the thickness. But oh, it’s so lovely in person. The lovely contrasting green trees can’t help but this make this Oregonian smile. I figured it would be perfect for a hike, keep us warm and match our surroundings. 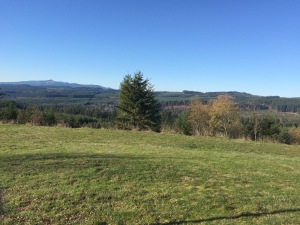 I had been dying to take Jack hiking here.  It was very exciting to have a new State Park open just a quick drive from Portland. I first went with my parents when I was still in high school for its unofficial opening weekend and it was a mess. But, I had heard it had transformed into a wonderful area over the years. I was not disappointed!

Jack and I set off right after breakfast, both very excited to get out of the house. We had been cooped up preparing for Thanksgiving for a few days and wanted out. It had been freezing the past few days in the Willamette Valley so I dressed us both very warmly. Two layers each, plus gloves and hats. I put waterproof pants on Jack, worried it might rain on us (or he might find some mud to jump in). 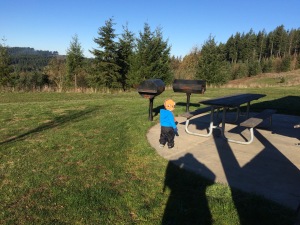 It was cool, but sunny once we arrived. I let Jack run around for a bit while I decided on a trail. Once I selected to head out to the Unfit Settlement View, I chased my toddler and got him up on my back. He was tired and ready for a nap after all that running around, so it wasn’t easy. 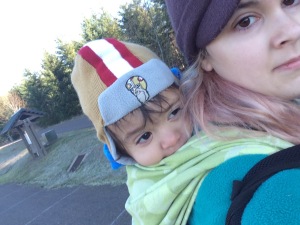 I started with Ruck Tied Tibetan and set off on the trail. But after a few steps, my lower back was killing me so I paused to see what way wrong. Jack’s seat was totally gone, bottom rail bunched half way up his back. So I took him down (much to his sleepy protest) and redid the carry. I figured I just had a bad seat and he popped it, happens to the best wrappers. But I noticed it was kinda hard to get a deep seat (and I am very good at getting and keeping a good seat), but figured it was just because I had gloves on and couldn’t feel the wrap that well. 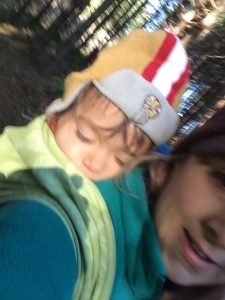 Five minutes later and Jack was sound asleep.This wrap is loaded with sleepy dust! I felt one with mother nature, carrying my baby wrapped in green. 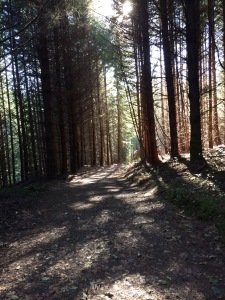 I walked for a leisurely half an hour, just enjoying nature. This park is truly a hidden gem! Well kept trails with a variety of lengths and difficulty. Our trail wasn’t too hard, but had a few good inclines. 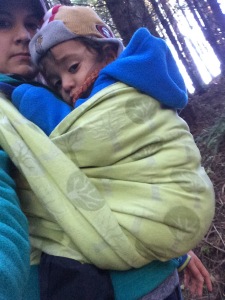 Then my back started to kill me again, so I reach back to feel my seat was gone again! I gently tried to fix it, but Jack woke up and was pissed. So I quickly set him down and switched it a Front Wrap Cross Carry so he could nurse. I had a hard time getting a good seat even in the front, I was puzzled. But I made it work , Jack latched on and we continued. We walked for another hour or so. Jack dozed for half of it and spent the rest shouting “Tree! More trees! Other trees!” every few seconds.

When I took him down when we got back to the car, I noticed the seat was about to pop again. This annoyed me, Jack had not been wiggling and I hadn’t been bouncing him around much. There was no reason for the seat to not hold. It

It was warming up, so I took Jack out of waterproof pants while he ate his snack. When he finished, he decided that was the perfect time to bolt across the field so I darted after him. Once I captured the little monster, I put him in a Ruck again walked back to the car. This time I decided to put Sylvan to the test. I bounced Jack up and down, danced, and told him to jump up and down. The seat did not budge….and it was way easier to do the carry this time too…. 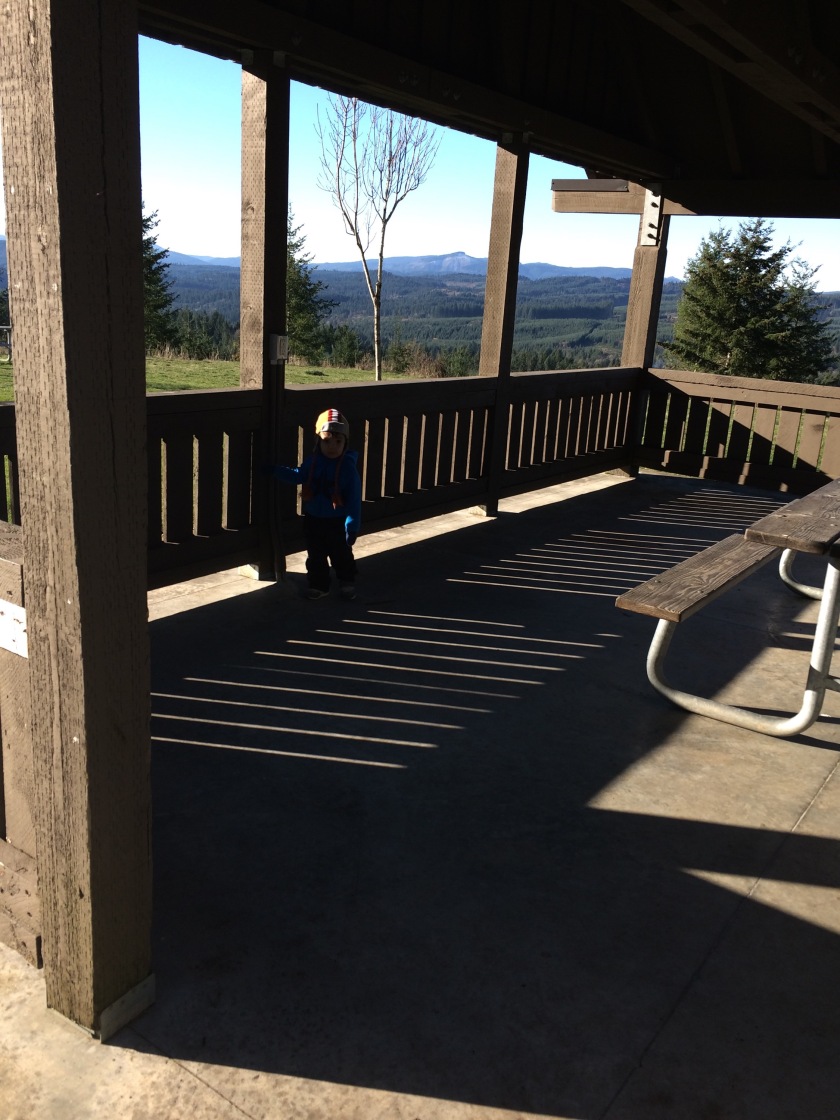 When I got to the car and saw the waterproof pants in the trunk it clicked. This wrap is so grippy that it needs other grippy fabric, or else it just slides around. It never stood a chance with slick waterproof pants.

The key feature of Slyvan is its thickness–for both good and bad. I suggest it for urban strolls, paved parks, unpaved easy/medium trails. I would not recommend it for long, difficult trails. I worry about maintaining a good seat wearing hiking clothes (like waterproof pants). This wrap makes a giant knot, which tends to dig into you after awhile. Not the best for long term wearing.  It doesn’t have a lot of cush, so it may get diggy on the shoulders eventually as well. I would not suggest this for a newborn, too hard to wrap around a tiny baby easily in all that thick fabric. However for a 6-months-old and older, this wrap is fantastic. It has lot of grip, so even a wiggly preschooler can be carried comfortably. Lastly, I would only suggest this for colder fall and winter hikes, once again due to the thickness. Don’t want to risk baby overheating otherwise.

So can you hike in a Pollora Sylvan Spirit? Yes, on reasonable trails in cooler temperatures when it’s not raining or snowing.