One year ago, we made the jump to cloth diapers. I talked about it in a previous post when we started, but I figured it was time for recap of how it went. I can honestly say with confidence it’s been wonderful. Best decision, no plans on going back to disposables full time.  When Jack has a bad rash on his butt from food allergies, we use disposables because the prescription cream is not cloth diaper safe (see here why). And my mom doesn’t like washing diapers and dealing with all the snaps, so she uses disposables when she watches him. I wish she didn’t, but she’s the free babysitter so I don’t argue anymore. 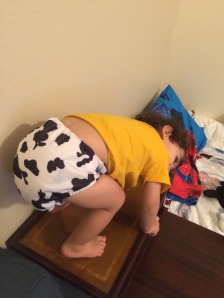 Like I said in my original post, I selected Alva All In Two (AI2) diapers because of the great price and reasonable reviews. They are often referred to as “China cheapies” and people have concerns about a their quality and origins. I haven’t seen any hard evidence against their business ethics, so I am not too concerned personally. What I can say is they have worked great. The covers have held up great. The elastic did not stretch out, the Polyurethane Laminate (PUL, the waterproof outer layer) has not pulled away or warped. The snaps have kept their snap and did not leak. I have not noticed any fading either, the bright colors are still bright!

I liked them so much, I decided to try some Pocket diapers. Most are Alvas. Some are LBB, which are rumored to be rebranded Alvas. They look and feel exactly the same. I bought some off the Cloth Diaper Swap and some off Amazon. I have some super cute patterns, they always make me smile.

That being said, the microfiber and hemp inserts they came with suck on their own. One liner of either material does not absorb even a light peeing. I double up with of the Alva inserts plus a Charcoal Bamboo insert. The microfiber absorbs quickly, getting it away from Jack’s skin, then soaks it into the slow but high absorbing bamboo. Works great for us.

What’s nice about AI2 and Pocket covers if they do not stink or have poop on them, you can use them again. Just remove the wet liners, insert clean ones and put the same cover back on. However, I hardly ever do this. Jack has no patience to lay still while I take off the diaper, unstuff, restuff, and put it back on. I usually have 5 seconds to change before he runs off, pants or no pants. So I just put a new, already stuff diaper on each time. Thus, I use them more like All In One (AIO) diapers, but oh well. I know a lot of people also do this.

We do have some organic cotton AIOs from Villababies. They are super cute and work WONDERFUL for containing poop blowouts. I was happy to have them when Jack had a stomach bug a while ago. They are trim, fit snuggly around the waist, and no gapping around the thighs on Jack. But, they are not the best for long term wearing. Jack can soak through one after just one pee. He isn’t that heavy of a wetter either. We had several leaks using them. Well, more like soaks.

They just don’t high absorbency. I haven’t sold them because they are a nice filler diaper in my stash. If I need a trim diaper, we are just going to be home and I can change him often, or he’s got the runs. But they are not the first ones I grab each day.

At night, we use a Pocket with one microfiber, one charcoal bamboo, and one hemp. I know some are going to read that and be like WHAT? YOU USE THREE INSERTS? JUST BUY SOME NIGHT SOAKERS AND SAVE YOURSELF THE BULK!

Yeah, I don’t have extra money to spare and my method works just fine. I am big fan of using what you got on hand in any situation. I can only think of two or three leaks we’ve had all year, and those were mainly from not getting the diaper snug enough.

And to answer a few questions I get asked a lot:

Check out my washing routine post and journey into newborn cloth diapering coming up next.