My Twitter follower @SaraLJohnson75 suggested another recipe and I accepted the challenge. She requested a classic British dish, Yorkshire Pudding. I tried other lovely British foods before I became a vegan, but never had the pleasure of Yorkshire pudding. So, I must admit I am at a slight disadvantage. After some consultation and research online, I got a pretty good idea of what they should taste like: savory, a little flaky and very rich.

I found a great traditional Yorkshire Pudding recipe on About.com (it even has a video) that I based mine on. In this recipe, the eggs are for binding, leavening and flavoring so I wasn’t sure what type of replacer was best (most have a hard time doing all three). The vegan recipes I found said they had trouble getting theirs to rise properly so they had used a lot of powdered egg replacer (usually made from starches) such as Ener-G Egg. However, this alters the texture a lot so I decided to try something different.

I came up with two recipes and made a small batch of each. The first uses ground flax seed as an egg replacer and the second uses yeast. I must confess neither one rises significantly, and although still pretty delicious, are not quite right.

I had the highest hopes for the flax seed version because they are a good binder and have a rich flavor when cooked. These ones had an egg-like flavor, but they were flat. For some reason the pictures wouldn’t upload from my camera, but imagine little 1/4  inch brownish hockey pucks. 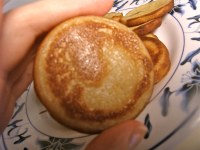 I worried the yeast ones would come out too spongy or puffy so  I made them second. They are definitely fluffier than the flax seed batch, but still aren’t the right density. I thought about combining the two recipes, to even out the texture and flavor, but I ran out of yeast. This a hard recipe to convert since it is so heavily dependent on the unique properties of eggs.

As a vegan, you learn quickly sometimes you just have to shrug your shoulders and say “oh well.” Another question I encounter often is, “Doesn’t it suck that you can’t have ____?” And I tell them that I don’t think of it that way. Veganism is a life-style change, not a diet. I chose to change my life because I wanted something better.  Yes a rich pudding would be lovely to eat everyday, but it leads to an unhealthy and unhappy lifestyle that I do not desire. I choose life over food is what I am essentially saying. But, that doesn’t mean I don’t get to eat good food (hence the whole point of this blog), it just means I choose different (and better) things to cook with.

Anyways, these are still good—especially with some nice steamed veggies and a nice mushroom gravy (they soak it right up, gives them a yummy, gooey middle).  Try them both, and please let me know if you have a better recipe!

Dissolve the ground flax seed into the water. Microwave or heat over the stove until slightly bubbly and thickens into a syrupy consistency.

Add flour and mix until smooth.

Set aside in a cool place for at least 30 minutes.

Proof the yeast by dissolving it in the warm water and add the sugar. Set aside for about 10 minutes, until it becomes frothy.

Add flour and mix until smooth.

I let mine rise for only 10 minutes because I didn’t want them to puff up too much and be spongy. Both of the Brits I consulted said they should be more like crepes, not like bread. I suggest only leaving them a little bit longer, maybe 20 minutes or so.

Pre-heat the oven to 400 degrees F.  Oil a cupcake or muffin tin well and place in the oven until the oil starts to smoke a little bit. Watch it carefully so it doesn’t burn and ruin your tin.

Remove the pan from the oven and fill each cup 1/2 of the way with batter.  I filled only 1/3 of the way because I expected them to rise more, so if you are using my exact recipe, I suggest filling them more.

I will attempt Yorkshire Pudding again in the future, but I am happy with what I came up with for now. Hope you like them too!