I saw the recipe on VegWeb for a Holiday Seitan Roast awhile ago and thought it sounded interesting. I love seitan, as evident in my two other posts about it, so I decided this year I would give the roast a try. But I deviated a from the recipe quite a bit. I boiled the roasts (the recipes makes two small loaves) first because I like the texture of boiled then baked seitan. Overall, I REALLY loved this dish. It was easy to make, flavorful and juicy. It even sops up gravy well. I am definitely be making this again sometime.

In a large pot, add all the ingredients for the broth together and set aside. Do not turn the burner on yet. 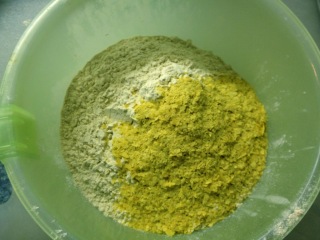 In a large bowl, add the vital wheat gluten and nutritional yeast and mix together lightly.

Add the remanning ingredients and stir until it is too thick for a spoon.

Knead the dough the rest of the way until it comes together and is smooth. This should only take a minute or two so don’t over knead. 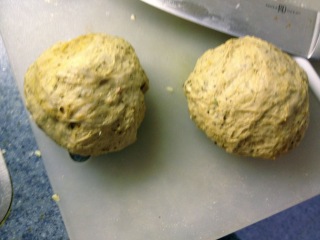 Divided in half and form into small loaves. 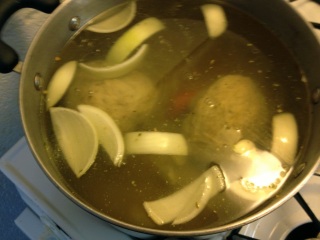 Put the loaves into the broth, turn on the heat, and bring to a boil. Make sure to cover with a lid. 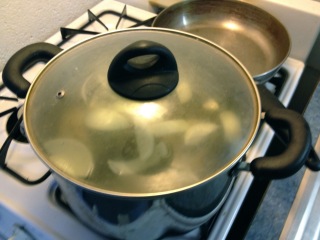 Once it starts to boil, reduce to a simmer and keep the lid on. Boil for about 30 minutes total.

While that boils, pre heat the oven to 350 and spray a baking pan with cooking spray.

Combine the all baste ingredients except the carrots and onion.

Remove the loaves from the broth and place them in the baking pan. Spread the quartered carrots and onions around the loaves and cover with half the baste.

Bake for 15-20 minutes, until the broth is absorbed. Cover with the remaining baste and bake for another 10-15 minutes.

Plate, slice, and serve. I topped mine with some mushroom gravy. I think I will make this again for Christmas.