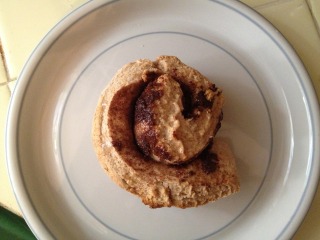 Guess what classic American product is vegan? Bisquick! Now, I don’t bake sweets often and I don’t use box mixes often, but I wanted cinnamon rolls this morning (and Michael was pretty happy when I woke him up and said I was making them). Of course I made a healthier version not loaded with all the sugar and butter. I just altered the biscuit recipe on the Bisquick box. They are easy to make and a nice treat once in awhile.

In a large bowl, mix together the Bisquick, soy milk, and agave. Once it becomes a ball of dough, place on a floured surface.

Knead just until it comes together.

Roll into a 1/2 thick rectangle.

In a small bowl, mix together the cinnamon and sugar.

Spread the cinnamon and sugar mixture evenly on top of the dough rectangle. 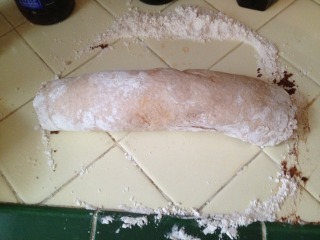 Carefully, starting with the end closest to you, roll the dough over into a tube. 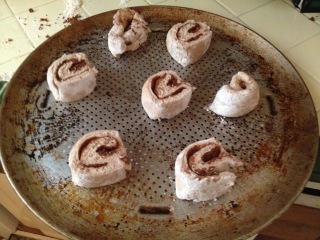 Cut into 6 to 8 equal pieces and place on the baking sheet.

Bake for 8-10 minutes, until slightly golden.

In another small bowl, add the powdered sugar and just enough soy milk to make a runny icing.

Drizzle the icing onto the rolls while they are still warm.