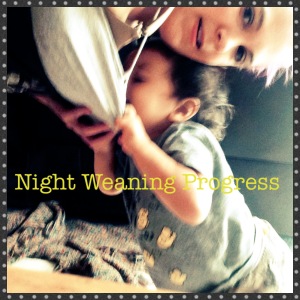 Two months ago I posted about how I was ready to gently start night weaning Jack.  You are probably wondering how it’s been going. Maybe even wishing I had some amazing story where I just snapped my fingers and he slept through the night. I wish. I so wish I had a great and easy story with some magic secret. But sadly no. But I do have a story of love, understanding, and a pretty happy ending!

So the night after I published my night weaning post, I implemented my plan.  We had a good routine before we got to bed. Bath time with lots of play to tire him out, pj’s and brush teeth, and a few books in bed and snuggles with papa. Then I nursed him to sleepy and unlatched him and rubbed his back to get him to go to sleep. 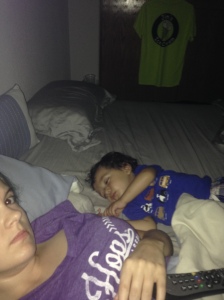 Then the next week one day he accepted it. He nursed to sleep, I popped him off and he laid down next to me and let him rub his back to sleep. It took FOREVER though. He just kept jabbering away and wiggling. But no tears and it did work eventually. He woke up several time to nurse that night, but it was a start.  During this time I also started a part-time job where I work 2-3 evening a week, so Michael or my mom puts him to bed. I think this was key, he learned that there are other ways to go to sleep besides milk. At first they had a hard time getting him to sleep, but they were just patience and loved him through it. They do offer him a bottle before bed, it’s hit or miss if he takes it.

After a few more days, I decided to try to drop his first feeding of the night. And it worked! When he woke up, I just rubbed his back and told him “the milkies are asleep” and he eventually went back down. After a few days he didn’t wake up at that time at all.

Then I got greedy. I decided to drop the next two feedings. It all blew up in my face. He would wake up around 3-4 AM demanding milk and I mean DEMANDING. Screaming at the top of his lungs and ripping at my shirt to get a boob out. I tried that for two nights and it was horrible. The second night he got so frantic that when I finally gave him my boob back, but it was too late. He worked himself into a state and would not calm down. I lost my patiences and had to go sleep on the couch while my husband calmed him (to no avail). He passed out from exhaustion at 5:30 AM and I came back to bed feeling horrible. Clearly this was not the way to do it. I got ahead of myself and did not consider Jack’s feeling. 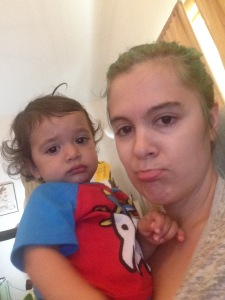 Luckily I had a La Lech League meeting that morning. I got some great words of encouragement and wisdom. They suggested that I stick to just dropping the one feeding for awhile until he’s ready to do more.  That night back to nursing to sleepy and encouraging him to drop the first wake-up. After two weeks,  he was doing great. No more tears or screaming. He would go down on his own and sleep until 3 AM. After that he awoke every 2 hours to cluster feed, which I could handle better after several hours of sleep.

Just when I was thinking of trying to drop the 3AM feeding, it all fell apart again. As I mentioned in the intro to my guest post last week, Jack has been having some allergy issues for months now. Hive, rashes, and diarrhea on and off. We think that coupled with a stomach bug going around really upset his tummy. He had a constant rash and had the worst diapers I’ve ever seen. This lasted for 10 days! He barely ate and nursed like crazy. He couldn’t sleep at night because he was having stomach cramps. He would wake up screaming and holding his belly. It was the first time he ever signed hurt to me. I threw all the night weaning out the window and spent 5 nights holding him on the couch all night barely sleeping.

After some trips to the doctor and 2 solids weeks of antihistamines, he went back to normal. But it was back to square one with night weaning. I was very frustrated, but was better educated this time. I finished the book “Night Time Parenting” and gained a lot of perspective on toddler sleep habits. Plus this time I knew he could sleep for longer periods of time without milk. I was armed with knowledge and patiences to try again.

One night he woke at 1AM and would not unlatch for anything. He was just nursing and nursing. I was so tired that I started to cry. I unlatched him and we had a talk. I explained that momma is too tired and not happy. He deserves a happy mommy who plays with him all day. He said yes. I said if we only nurse when the sunshines, the whole family—including him–will be happier. He said yes. I told him I will hold him all night and so will daddy. If he’s thirsty or hungry, he can get up to get something. All he has to do is ask nicely. He said okay. Then we laid down and snuggled. It took a long time, but he did falls asleep and stayed asleep until 7. When he woke up, daddy opened the window and I told him the sun is shining so he can have all the milk. We all snuggled in the bed smiling. I knew we turned the corner.

The next night I told him he could all the milk he wanted, but once he got sleepy, it was time for sleep so the milkies would go to sleep to. He said okay. Then when he was starting to close his eyes, we said good night to the milkies, and he rolled over and went to sleep. I couldn’t believe it! That night slept till 5:30, I offered him a little milk and he went back to sleep until 8 AM!

This general pattern of sleeping until 4 or 5 AM, then cluster feeding until 8 AM has continued for almost two weeks now. It’s not perfect, but it’s so much better.  I can handle the cluster feedings after a several hours of sleep at least now. And he’s taking 2-hour naps all on his own! I nurse him down, then leave him the bed and get to do something else for a bit.

So my advice? Just love your toddler and respect their feelings. Talk to them. Keep talking. Keep the idea of nursing only during the day out there. Ask them how they feel about it. Talk them through their feelings. Try it every night, but back off if they resist. Try again the next night and back off again if they resist. One day—maybe not right away— they will accept it. It’s not easy, but it will be worth it. Your toddler will respect you and know you still love them. There is no point in forcing them into something they are not emotionally or mentally ready to handle yet. I know you are tired, but remember this is only temporary. They will only be a nursing toddler once, and it lasts for such a short time. 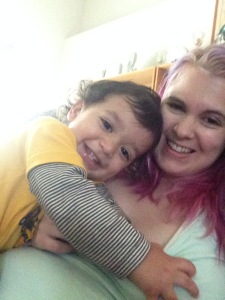 One thought on “Progress with Night Weaning”