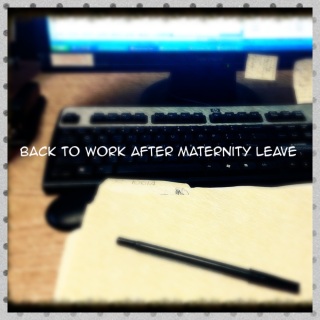 I returned to work after 17 weeks of maternity leave. The State of California allows up to 4 weeks off before your due date, plus 12 weeks off for bonding time. The extra week off came from vacation time. I have the same job, but I am working second shift for only part-time hours right now. As Jack gets bigger I might slowly add more hours back to full time, but no rush from my boss as long as stuff gets done.

Michael and I worked it out so we avoid paying for childcare. He works first shift while I stay home with Jack. Then I put Jack in the car, bring him to our work and we trade cars. Then he drives home with Jack and I go to work. Then I get off just in time to get Jack ready for bed. I like this solution for two reasons: we avoid the $1000 a month bill for childcare and we both get time to bond with our son. And so far Jack doesn’t seem to mind. He usually falls asleep in the car with me and wakes up when Michael gets home.
But the first day back was hard. The night before I bawled my eyes out over it. Jack had been my whole world for three and half months, how could I leave him? That day I brought Jack in the building with me because he was awake when I got there. Michael was ready to go so he quickly took Jack from me and kissed me goodbye. I just stood there thinking No! Bring me my baby back!  I went to my desk and started to work, but I kept worrying about my baby. What if he wont take the bottles? What if he wont nap? What if Michael doesn’t do tummy time? What if he just cries the whole time? What if he forgets me in these next 5 hours and never wants me to hold him again!?!?

When it was time to clock out, I rushed home. My boys were standing at the door to greet me, and Jack lit up when he saw me. Everything was alright. Michael is an excellent dad and takes great care of him. I had nothing to worry about. That being said, I am a mom and I will worry about them both every day still.

But am I exhausted? Yes (especially with the sleep regression still going on). Are there some days I feel like Jack and I are never going to get out the door on time? Yup. Does it suck I get even less time with my husband now? Totally. As much as I wish I could be a stay-at-home-mom all the time, it’s not feasible right now. And everyone at work is so accommodating for what our family needs that there is no reason for me to quit.

Being back at work also means I’m pumping at work too. I will do a post about how that’d going next, so look out for that.

Two Fridays ago I met with the real OB/GYN , not just the practitioner, because I am in my third trimester now (27 weeks at the time). She said everything is fine and Jack is doing great. Then she started going over signs of preterm labor and how I need to go straight to the hospital if I something doesn’t feel right. Then I suddenly remembered that Tuesday night I woke up feeling like I REALLY had to pee. And no matter how many times I went to the bathroom, it was not go away. Jack was still moving normally and I could tell it was only urine was coming out, not amniotic fluid(urine smells like ammonia and you can stop the flow easily, amniotic fluid usually smells sweet and cannot be stopped). I was concerned, but decided not to the hospital. It went away by noontime so I was not that worried. My doctor immediately said I should always go when I feel weird pressure. Then decided I need to have an ultrasound and a cervical checked.

She asked me to have a seat in the waiting room while they squeezed me in between other patients. Forty-five minutes later and several text from my boss wondering where I was, I was called in. Jack was fine (he was in a weird position so we didn’t get a good look at his face) and I had plenty of fluid. Then they did a vaginal ultrasound for my cervix. It was long and closed, so everything was fine. She said he was probably just sitting on my bladder that day.
However, while they were checking his anatomy, I caught phrases like, “Measuring at 29 weeks”, “About plus 2 weeks” , and “Early April.” They also asked when my due date was and if it had ever been changed. I have heard thing like this all along, even at my pregnancy confirmation ultrasound. But no one had ever actually changed my due date directly. So I asked the ultrasound tech. She said that yes, he was measuring 2 weeks ahead. But an estimated due date is based on your last period plus or minus two weeks. Since he is not off by more than two weeks, they will not officially change it.
I asked the OB/GYN when she came back in. She agreed with the ultrasound tech. She said she will not officially change my due date, but unofficially I should not be surprised if he came at 38 weeks. And to not be upset if I am told I need a c-section because he is big and I am petite.

I am already getting really uncomfortable so I would not mind at all if he came reasonably early. And as much as I want to do it all naturally, I would not be upset if I had to get a c-section. I just want a healthy baby. However, my mom said they told her the same thing and she had two healthy babies vaginally that were pretty close to the actual due dates. I am pretty much her carbon copy, so if she can do it, so can I.

This week I started thinking about all the stuff I need to do before Jack arrives, including finalizing maternity leave.When my husband got me a job at his work, I was 16 weeks already. My boss asked during the interview how much leave I would take and when I would take it. I told him I wanted all the 12 weeks Family Medical Leave Act (FMLA) entitles me to and I will try to work up to my due date. He said no problem. He also kept asking every once and awhile if my plans have changed once I was hired, just so he knows when to start training my replacement while I’m gone.

I realized that maybe it is for the best I start my maternity leave at 38 weeks instead of working until I go into labor. I am already pretty uncomfortable, and it’s only going to get worse. It’s probably for the best if I give myself a break. And if he does come early, I wont have to be faxing in my leave forms to work and my disability forms to the state with a screaming newborn in my arms. My mom is also coming to stay for a month around that time. We can finish getting everything ready and have some nice bonding time together.

I wish I was tough enough to be one of those women who works right up until her water breaks, but I am not. I need to do what is right for my baby and myself. Like I said, I totally would not mind–if he is ready–to come early. I am already over being pregnant and just want to kiss his sweet little face already.

And yes, I already thought about what to do if he comes late, when I would have used up several weeks of my 12 week maternity leave. I have Paid Time Off that my boss said I can use if I need to once my leave is up. I will just need to let him know two weeks before I want to take it.

Before you finalize or take your maternity leave, make sure you talk to your boss and HR director. Also check out FMLA. It has some very specific wording that might disqualify you if just started your job or work for a small company. It can be confusing to figure out and you might need to think about your options for awhile if you do not qualify under FMLA. And see if your state offers disability pay for pregnancy and bonding time. California offers up to 4 weeks before birth and 6 weeks after of  disability pay for mothers. Dads get 6 weeks unpaid after the birth. Both of which are beyond awesome!

Michael is going to wait to take his until after my mom leaves and might use some PTO instead. My boss approved my leave to start the Monday I am 38 weeks. All I had to do was fill out an Absence Request Form. I see my pregnancy counselor in a few days, she will help me fill out the disability forms then. And I know that 6 weeks pay will not cover the full 12 weeks I plan to take off, so we will need to plan accordingly. That is why you should start getting this stuff in order before the baby comes!