Out past Pahoa is one of my favorite spots on the Big Island, the Ahalanui warm spring. It’s a natural geothermal pool that has been retained by a cement foundation and is refreshed with ocean waves. I love going there early before all the people arrive and swim a few laps in the nice warm water—just be warned there are little fish that will pester you every time you stop.

On the drive to the warm spring, I’d always past this sign for homemade huli huli chicken, and always wondered what it was. One time I finally Googled it and learned it essentially Hawaiian barbecue chicken.  Huli means turn in Hawaiian and it’s called “turn turn” chicken because it is traditionally cooked on a spit so it would turn and turn as it cooked over a fire.

But, I am vegan there is no real chicken and I am broke college kid so no spit fire roasting. Instead, I used seitan strips and cooked it in a skillet over a stove. I have made this several times before and finally decided to post the recipe. 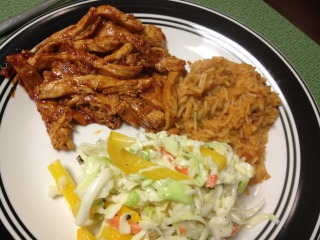 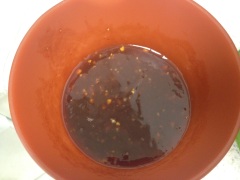 In a large bowl, mix together all the ingredients, except the fake chicken.

Now at the chicken and it it marinade for at least a half an hour.

Add the marinaded fake chicken and the sauce. Cook until the fake meat is heated and the sauce has thickened.

I served mine with cole slaw and rice. Tangy, sweet, and totally worth trying. I think Hawaiian barbecue is my favorite style. 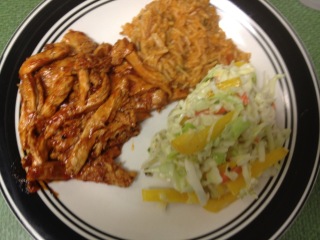 One thought on “Huli Huli "Chicken"”