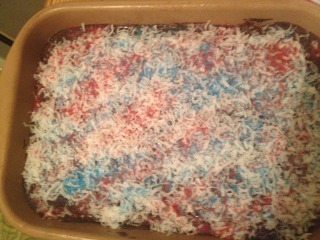 I felt patriotic and nice last week, so I made brownies for Independence Day. Michael requested brownies, so I decided to make a big batch and take half to work. To make them patriotic, I decided on red and blue sprinkles, mainly because I already had some at home. For the white, I decided against doing plain frosting. It was just too traditional and boring. I decided on shredded coconut instead, since I was already using coconut oil in the batter. Might as well just keep the same flavors going.

I used box mix for this, mainly because it was just easier. Vegan box mixes are not that hard to find, just read the ingredients. I do not eat processed and packaged foods that often, but a treat once in awhile is always nice.
I made double batch, but you can always just half the recipe and make one. 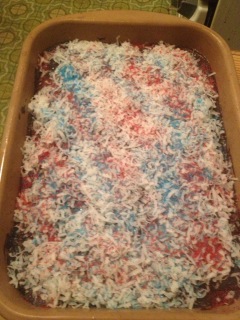 Coconut Brownies
2 boxes of chewy brownie mix (I used Duncan Hines)
1/3 cup coconut oil
1 cup unsweetened applesauce
2 tsp cornstarch
1.5 cups vanilla soy milk
1 can of chocolate frosting (I used Duncan Hines)
2 cups shredded sweetened coconut
Red sprinkles
Blue Sprinkles
Pre-heat the oven according to the temperature on the box.
Spray a baking pan (I used a 9×11) with cooking spray.
In a large bowl, combine brownie mix, coconut oil, applesauce, cornstarch, and soy milk. Stir until smooth.
Pour the batter into the baking sheet and cook according to the directions on the package.
Remove from oven and let cool completely.
Once cool, spread on the frosting in a light layer. No need to make it fancy, it’s just there to make the coconut shreds stay.
Cover the frosting with the shredded coconut, covering up as much of the brown as possible.
Next sprinkle on some red and blue sprinkles.
Now you have a patriotic treat! 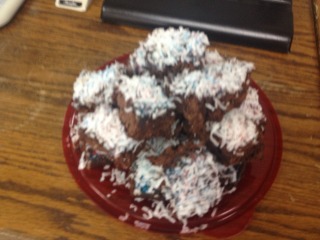 Michael and my coworkers liked them, yeah! And, if you change the sprinkle colors, they could be for any holiday. Red and green for Christmas. Yellow, pink, and purple for Easter. Purple, gold, and green for Mardi Gras. Black and Orange for Halloween. In your favorite teams colors for the Superbowl or the World Series too. Of what chromatic fun!