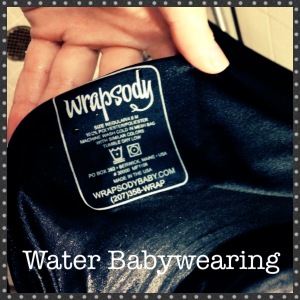 You know the one drawback to being an experienced mom? You get to facepalm yourself when you find a new product that could have made your life easier from the start. Babywearing allowed me to eat, go to the bathroom, and clean up around the house while keeping Jack happy. But I always had to wait until he was either asleep (and do the paranoid mom checking the monitor every 30 seconds) or wait until Michael got home. And sometimes things got so busy I forgot to shower (more like I fell asleep before I could even think of it), that it could be days before I got the chance.  Jack loved baths with me, but sometimes you need a good standing scrub to feel clean. Sometimes Michael would hold him in the shower, but it’s hard to shower and hold a baby (they get heavy after awhile!).

A few months later I bought a water ring sling to use at my sister-in-law’s house. It got the job done but was not comfy at all. I used in the shower when I needed to (like when I remembered it’s been 3 days since I had a good shower), but never really loved it. It made Jack happy, so I decided to hold on to it. But I knew I was not going to use it with another baby. It would be back to dreaming of showers.

Then Lorene from Frogmama let me test out Wrapsody WrapDuo and everything changed. The night it arrived, Jack and I took tested it in the shower. It was a hit!

We tried a Front Wrap Cross Carry, one of Jack’s favorite carries. He was so happy! All secure and tight—I could never get that stupid ring sling tight so he was never this secure before. It was easy to nurse in to (because toddler logic says a shower is a great time to nurse….).

A few days later I let Michael try it out at the local splash pad. Jack was grump and didn’t want to get wet. But Michael liked the wrap a lot.  He liked that I could pre-tie it on him, pop Jack in and out as needed. He said it would have been nice to have used when Jack was a newborn in the shower (that’s when I facepalmed myself).

Then we tried it out at the pool and it was another big hit! Sadly, I forgot to check the open swim times and we only got to swim for a half an hour. But it was a savior in the showers afterward. Jack was furious we got out of the pool so early. I kept him in the wrap and rinsed us off quick and ran to the car with no fuss. It was very comfortable in a wet Robin’s Hip Carry while we got the chance though.

Lastly, we had a playdate with Myste, another Brand Ambassador, at a pool with a splash pad. It was a little chilly when we arrived but Jack wanted to check out the splash pad still. He stayed warm enough in the wrap close so my body that he was happy to play. Later we went into the pool, and Jack was still just as happy. This time we did a Front Cross Carry so I could pop him in and out as needed. And it was once again a life saver in the showers. Jack was upset playtime was over, but we got right into a warm shower and he calmed down.

Here are my final thoughts on the WrapDuo…

Overall, the WrapDuo is a great wrap. Like I said, I am facepalming myself for not knowing about it when Jack was still a clingy baby who never me set him down. I could have at least been nursing him for 30 minutes straight while I took a warm shower!

Thanks Frogmama for letting us testing it out! I so need one when I have another baby.

One thought on “Water Babywearing”