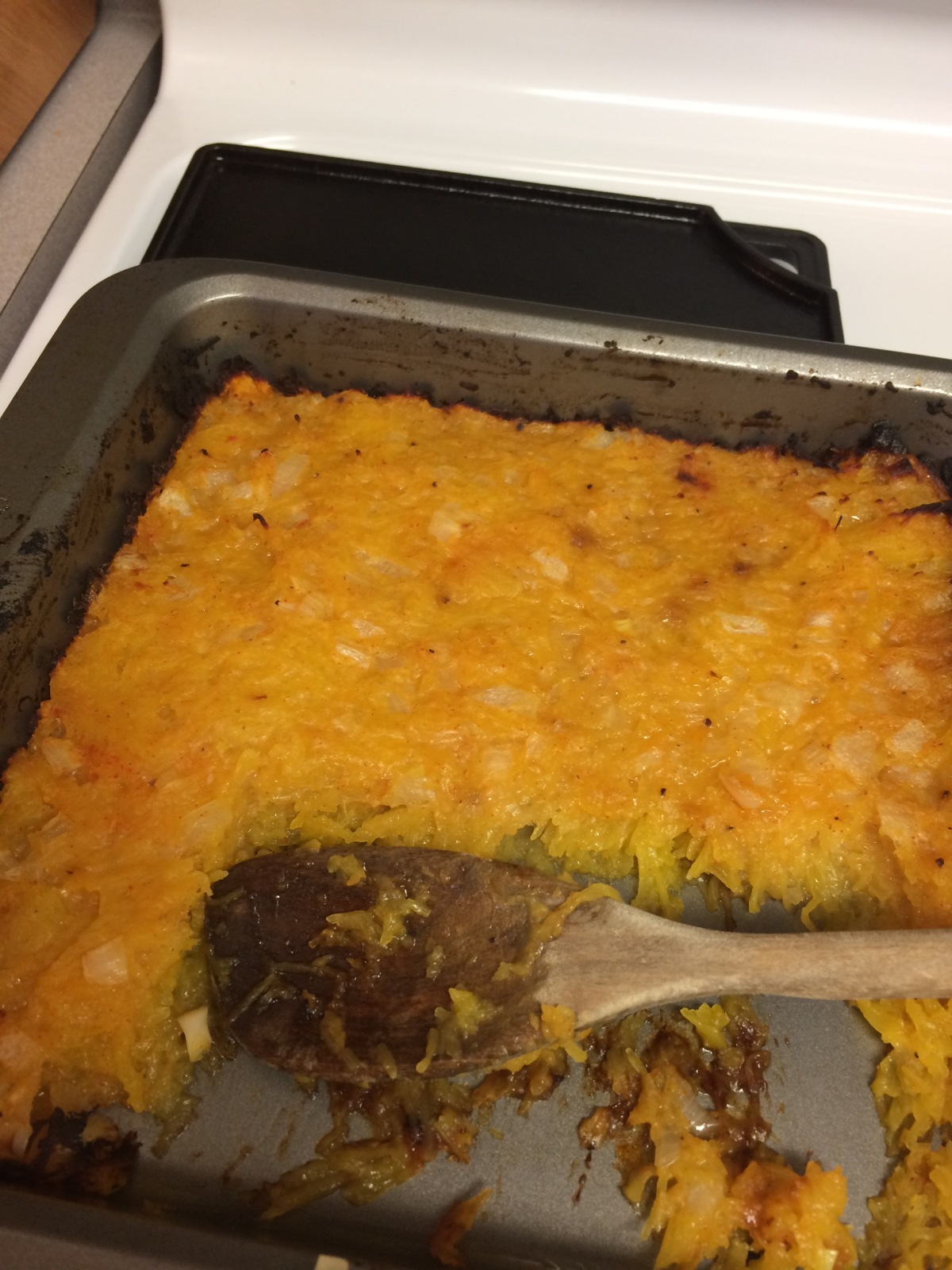 I love most vegetables, but I have never been a big fan of spaghetti squash. It’s just odd, a squash that breaks into little strings? Weird.  But I have been looking for more allergy-friendly recipes lately (I am getting really sick of brown rice, beans, and kale all the time). Spaghetti squash as on sale at the store, so I decided to try to veganize a recipe I saw on Pinterest, for hashbrowns.

I used VeganEggs and potato starch instead of eggs, and made it a baked dish so I didn’t have to stand around cooking (leaving a naughty toddler unattended doing God knows what).

I also made this a few days head of time and froze it all ready to go in the pan. Just heated the oven and watch cartoon with Jack until they were ready.

Prick holes in squash with a fork.

Place on a baking sheet and back for 45 minute. It will be soft to the touch when ready. Let aside to cool for 20 minutes.

Once cool, cut in half. Scoop out the seeds and discard.

Scoop out the squash strains with a fork, making sure the separate them.

Add squash to a large bowl. Add all remaining ingredients and mix together well.

We enjoyed this for breakfast in the morning,  Michael could not get enough of it! But this would be  great for any meal….especially if you feel like using it as taco filling.

These were the best tacos ever! Just some corn tortillas, scoop of squash hashbrowns salsa, Daiya cheese, micro greens, and hot sauce. Make this, I promise you will not be disappointed! 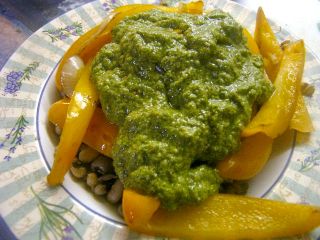 Apparently today is National Taco day. And Halloween is just around the corner. So I thought I would combine the two. But, my normal grocery store did not have vegan tortillas and I didn’t feel like driving around town to find some, so I decided to make a rice bowl instead. All the same stuff as a taco, just over rice. For the Halloween  aspect, I used orange bell peppers, black-eyed peas (wooo, scary your food has eyes!) and topped it with a slimy-looking (but actual texture far from it) green kale pesto. I made the pesto the other day so I don’t have photos, but it’s so easy they aren’t needed. This recipe makes 2, but can easily be multiplied. Black beans would be good for the Halloween theme too. 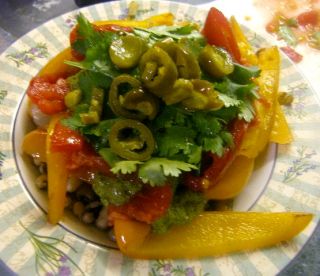 To make the kale pesto, first wash the kale and basil well. You can remove the stems if you like but I left them on. Peel the garlic too.

In a blender or food processor, add the kale, basil, garlic, and pine nuts. Pulse until ground up and combined.

Add the olive oil and lemon juice. Blend until smooth.

Season with salt and pepper to taste. I also added some red pepper flakes for a little kick.

The color might be reminiscent of slime, but it’s so good. And not to mention the wonderful health benefits of kale.

For the rest of the rice bowl….

Cook the rice according to the direction. I did mine in a rice cooker. Set aside.

I soaked my beans overnight and cooked them according to the package with just a bit of salt. If using canned, rinse them well and just heat them up. Set aside.

Slice the onions and peppers into strips. Chopped the garlic. 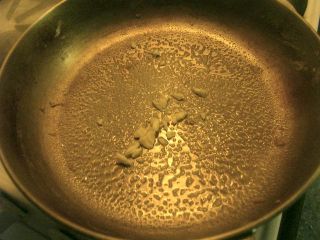 Heat some oil in a large skillet over medium heat. Add the garlic and cook just until it softens. 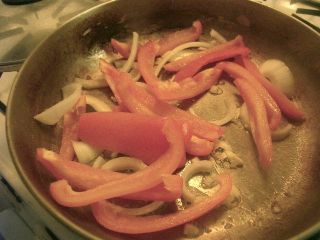 Add the onions and bell peppers. Season with a bit of salt and pepper and cook until the bell peppers start to blacken a bit and onions start to caramelize.

Time to assemble. In a bowl, put a serving of rice.

Next put on some black-eyed peas. 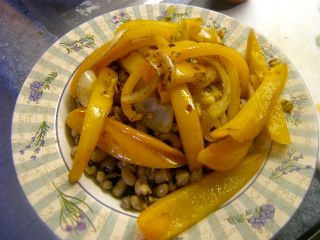 Then the orange peppers and onions.

Now put some of that lovely green kale pesto.

Lastly, I topped mine with some cilantro and jalapeños. But sour cream, vegan cheese, olives, or any taco toppings would be wonderful too. I am trying to eat more holistic foods so I kept it simple.

The pesto is what totally makes the rice bowl. And the orange peppers are just fun. 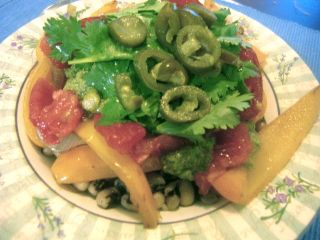 There will be more Halloween posts to come. It’s my favorite holiday because I am named after Elizabeth Montgomery’s character Samantha on the TV show Bewithched.