What do you when your whole family wants pulled pork sandwiches and you’re vegan? Pull out for textured vegetable protein (TVP) and veganaise! A lovely dinner to welcome the start of summer, which is right around the corner.

This recipe is super easy. Can be pulled together in minutes—way easier than making pulled pork! But it tastes just as good as if it had been cooked hours and hours.

In a large bowl, add the TVP and pour the boiling water. Add the 1/4 cup BBQ, flax oil, and liquid amigos. Stir together well.  Set aside for 15 minutes

In another large bowl, mix together all the remaining ingredients—except the BBQ and bun— to make the coleslaw. Cover and place in the fridge to chill.

Once the TVP is rehydrated, heat a skillet over medium heat. Add the onions and TVP mixture to the skillet. Cook until the onions are translucent and the liquid is mostly gone.

Add additional BBQ to the TVP if you like for more flavor.

Sweet, tangy, and satisfying! No reason you have to feel left out this summer at a BBQ. 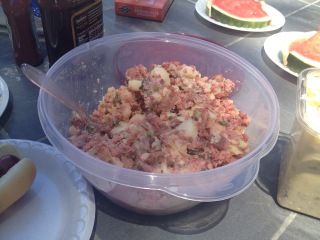 Last weekend Michael was a groomsman in a college friend’s wedding. That meant a trip to Lake Tahoe! I went there for the first time in March for his sister’s wedding and instantly fell in love with the area. We are already trying to plan a camping trip back there soon. The day before the wedding they had a BBQ at park right on the lake and requested everyone bring something to share.

I instantly thought German Potato Salad. My mom found the recipe in Cooking Light years ago and made it often when I was a kid. It’s WAY better than traditional potato salad. Light, but still creamy. Salty, but a little tang. However, the real recipe for German Potato Salad has bacon and uses the bacon fat to make a sauce. I still wanted it, so I decided to make a vegan version. I figured if it did not come out right, we can always just buy a veggie platter on the way to the BBQ.

I decided to use Bac-O Bits ( they are made from soy, check out my Mac and Cheese post) instead of bacon. However, I had some trouble deciding what to use instead of the bacon fat. Normally you cook the bacon, reserve the fat and use it to make a roux for the sauce. I thought about adding some olive oil instead, but the flavor would be wrong. And the more I thought about it, what is the point of making this dish healthier if I was going to load it up oil? Good fats are an important part of healthy diet, but there would be plenty of other food with adequate fat at the BBQ. No need to add more. So I decided to just skip oil all together and just use some water.

Fill a large pot with cold water. Add the quartered potatoes and bring to a boil. Cook until the potatoes are soft enough for a fork to easily pierce.

While that cooks,  saute the onions until soft (I did this was just a little water, but you can use a little oil).

Add the bacon bits and cook for a minute, just to warm them up.

Next add the water and flour. It should make a lose paste. Stir out any clumps.

Add the vinegar and mustard. Turn off the heat and set aside.

Once the potatoes are cooked, drain and return to the pot.

Add the sauce and mix well to coat every potato.

Season with salt and pepper to taste.

Let this sit for at least 2 hours, overnight would be better. I actually made this two days beforehand (mainly because there was no way I could make it at the hotel) and it was prefect.

This dish is served room temperature, and it has no dairy so no need to worry about it spoiling in the sun during your BBQ.

Everyone liked my potato salad, the Step-Mother-of-the-Bride thanked me for bringing it!

Congratulations Jeff and Rachel! Your wedding was beautiful and I wish you a long, happy life together! 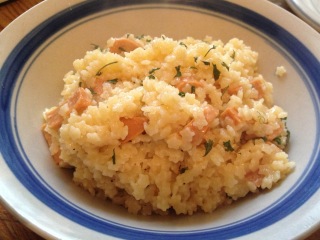 I do not believe that majority of children are natural picky eaters. I believe it is parents themselves setting the bad example of not eating their veggies. Why would they want to eat something that their parents do not want to eat? And, of course it will be hard to break them of bad eating habits later. If they are used to eating fatty, oily, high carb foods, they will resist wanting anything else. So it is important to teach kids from an early age the importance of whole foods like fruits and veggies—-and eat them yourself to set the good example.

That being said, there is nothing wrong with making healthy versions of the things all humans are love: carbs, protein, and fat. All animals crave carbs because they fill you up, protein because it sustains you, and fat because it has calories to keep you going. But, we are evolved animals with big brains that we can use to make smart choices about our cravings.

This recipe is healthy version of a kid friendly dish, mac and cheese with sliced hot dogs. It uses soy cheese, vegan butter, and soy hot dogs. I used star stelline, a star shaped pasta, to make it more fun for kids.

Bring a large pot of water to boil.

Add the pasta and cooking according to the directions on the package.

While pasta cooks, heat the hot dogs. You can either microwave or pan fry them according to the directions on the package.

Cut the hot dogs into desired sized slices. Make sure you cut them small enough so your child does not choke. Check out this link for advice.

Once the pasta is cooked, drain and return to the pot.

Add the hot dog slices and parsley. Mix together well.

Season with salt and pepper to taste.

Quick and easy lunch that kids (and you) will love!

In celebration of the Giants making it to the World Series, I told Michael I would make him whatever he wanted to eat during the game. He eagerly requested I make a version of Wienerschnitzel‘s chili cheese dog and chili cheese fries. So I did some research on the web and found a copy cat recipe. I made a few small changes, and used soy protein crumbles instead of ground beef for mine. This recipe is proof that vegans don’t just eat boring salads!

This make 4 servings of chili, enough for chili cheese fries and a chili dog for two people.

In a skillet over medium heat, crumble up and brown the ground beef.

In a small bowl, whisk together the water, corn starch, flour, and tomato paste.

Add the remaining ingredients and cook until the sauce is at desired thickness.

Put the chili on some fries and a hot dog—or anything else you want! And don’t forget to add a little vegan cheese too.

This was soooo good. And WAY healthier than the real stuff.

Guess what other American classic is actually vegan? McCorkmick’s Bac’n Pieces! It is made from soy. Once again, it is a processed food and needs to be eaten in moderation. But it can provide that “meaty” flavor to your favorite dish on occasion. I decided to add them to my mac and cheese, along with some veggies.

I have posted a recipe for mac and cheese awhile ago that uses Daiya Cheese and nutritional yeast. This recipe only uses nutritional yeast because I was trying to cut down on calories and processed ingredients.

Bacon Bits Mac and Cheese
8 ounces macaroni
1 small onion, minced
2 carrots, finely chopped
3 stalks of celery, finely chopped
1/4 cup vegan butter (I used Earth Balance)
1 cup nutritional yeast
2 cups soy milk
1 tsp mustard
1 tbs soy sauce
1 clove of garlic, minced
2 tbs of Bac’n Pieces
Salt and Pepper to Taste
Cook the macaroni according to the directions on the package. Drain and set aside.
In a large pot, sauté the chopped onions, carrots, and celery in the 1/4 cup of butter.
Once the veggies are soft, add the nutritional yeast. Mix together until it makes a lumpy paste.
Now add the soy milk, mustard, and garlic. Whisk to get the lumps out.
Add the cooked macaroni and the Bacon Bits.  Mix it all together and season to taste.

Now you have bacon mac and cheese without all that cholesterol! 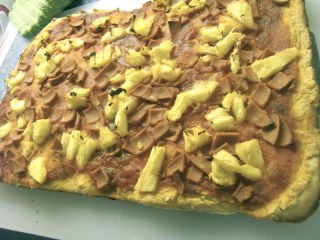 After about a month of conflicting schedules, my friends Rick and Kyla finally made it over from Kona to come visit me. It was nice to seem them and nice to have someone to cook for for once.

Awhile ago I saw a recipe for a pizza beer pizza crust. I can’t remember where I found it, but it was called something like “lazy single guy pizza crust” and that is essentially what it is. Just dump a some beer into flour and there you go. I was curious and decided to give it a try. The recipe claimed it would rise a little bit after 10 minutes, but it lied. It was still good though. It tasted just like a normal dough recipe, yeasty favor and all. It was a a little denser and chewier, but no big deal if you like thick crust.  Overall I liked it and it was definitely easy to make. I used Long Board from Kona Brewing Company because it’s awesome and thought it would be nice to use something local. 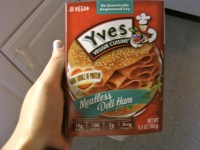 I made one Hawaiian pizza, topped with fresh pineapple that Rick brought and vegan ham from Yves (the store was out of vegan Canadian bacon but it’s same thing really), and one veggie with my usual toppings so refer to my Veggie Pizza post for those.

Both were cheese-less but topped with hummus instead. And, I am finally including my hummus recipe in this post. And yeah, I know traditional hummus has tahini and other fancy stuff, but this basic recipe is still good and easy to make (how many people really keep tahini in the house on a regular basis, let alone a single college girl?) And, I used a store-bought sauce this time because I had some on hand. 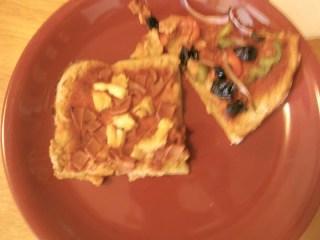 For the hummus, throw everything into the blender and blend until smooth. I suggest adding the water in slowly as needed to help it come together so it doesn’t get too runny.

It may not be traditional, but tastes just as good to me.

The crust is just as easy. Pre-heat the oven to 500 degree Fahrenheit.

In a large bowl, add the flour. Next add the oil and salt. Then pour in the beer slowly. Add a little bit at a time and mix well before adding more. Depending on climate, you may need more or less. I actually needed a little less then the whole bottle. It is ready when it’s slightly tacky but moist. 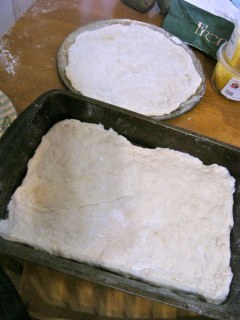 Since it doesn’t need to rise, it’s time to knead. Sprinkle some flour on a clean surface and knead gently. Don’t over work it, just till it’s smooth and workable. Roll the dough into the shape of pizza pan. Transfer to your pan and shape to fit. If it tears, just mold it back together.

Time to top. Spread the hummus on in an even thick layer. 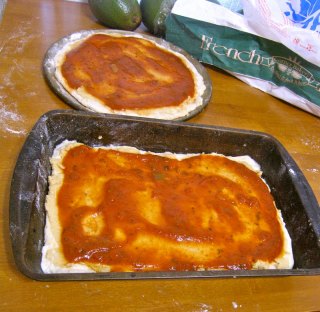 Spread the tomato sauce on top. 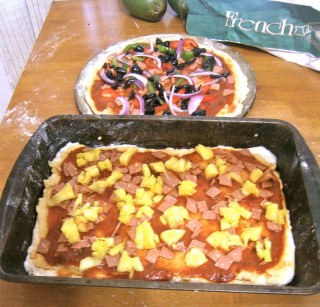 Then finally top it with the Canadian bacon and pineapple.

Bake for 15-20 minutes, until the crust is all golden and crunchy.

It was so nice to share lovely vegan food with lovely friends! Thanks for coming guys!